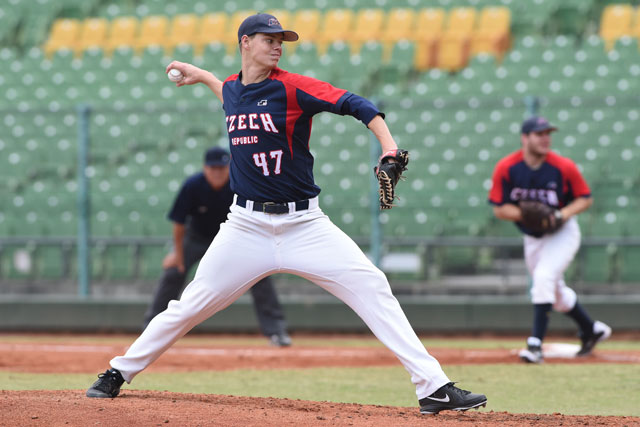 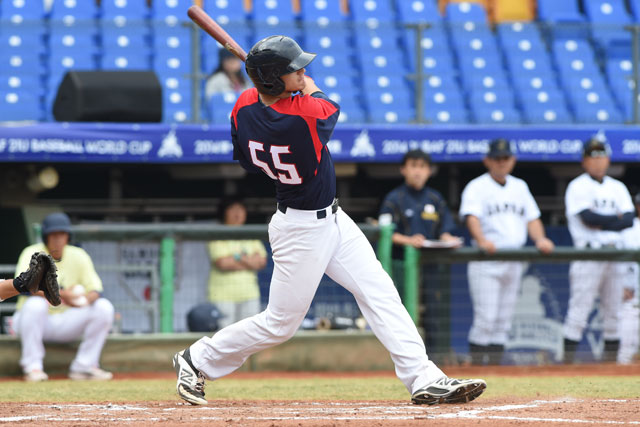 Last year in November at the 1st 21U World Cup held in Taiwan, once we'd gotten into the second round it was going around among the volunteers at the site that the Czech representatives were strong. After hearing the details it seems that in the first round they had defeated Italy and Mexico, were at 2 wins 3 losses and, as number 3 in Group A, had proceeded into the second round. This was a brilliant, historical achievement for them and, perhaps because they hadn't assumed on proceeding further, were having trouble changing their tickets for their return flight. That was the inside story as they faced Japan in their first game in the second round. They lost when the game was called in the 5th inning with the score 0-15. However, if you take away the bad throw with the bases loaded and other such errors, I got the impression that in terms of real strength the teams were not as different as the score would seem to show. Also, though it was a world tournament with age limits, there were the facts that out of 11 teams they came out 5th and had ranked higher than European powers Italy and the Netherlands. I felt Czech baseball would be sure to continue developing quickly and make more progress.

Like the other countries of Europe, after World War I baseball was also brought to the independent Czechoslovakian Republic by Americans. However, because of ethnic opposition and invasion from other countries, the sport was not able to find good soil to grow in. After World War II, under the influence of the Soviet Union, a communist government was established and so baseball, as a symbol of the leader of the West, America, was limited to being a pastime only enjoyed among a few people. According to International Baseball Federation (IBAF) documents, it seems that in 1964 in the capital, Prague, the first team was formed when students on a softball team at a certain university changed to baseball. In 1966, that team temporarily joined the European Baseball Federation and went on a tour to Italy and the Netherlands as well as Belgium and Poland. Even after that baseball didn't develop roots. Though starting with the 1989 Velvet Revolution the communist system was destroyed and the next year, 1990, a domestic league, the Extraliga was established. Also, because of the Velvet Divorce of January 1993, the Czech and Slovak Republics were peacefully separated and they both soon joined the International Baseball Federation. They organized representative teams and began entering international tournaments in Europe in the 1990's.

Players and other people in the baseball world from Japan, first of all, but also North America and Asia, began asking each other whether the Czech Republic was putting more effort into baseball during the 36th IBAF World Cup held in the Netherlands in 2005. Just before the tournament was to begin, the European representatives, Greece, declined to appear. The IBAF requested Czech Republic to participate and they accepted the offer. They were in the same preliminary league, Group B, as Japan. Even though they lost all 8 games, they were able to give the eventual number 2 team in the group, Nicaragua a tough 0-1 game and grappled with America to come out 3-7. During games where their ace level pitchers took the mound, they did better than expected and fought well. After this, their virtual debut in world baseball, the Czech Republic began to aggressively participate in international tournaments. In August 2007, at a test tournament for the Olympics held in Beijing, China, they played against Japan. Pavel Budsky, who has played under the umbrella of the Kansas City Royals started the game by getting 2 runs off Shota Oba (Currently with Fukuoka Softbank). In overtime, the Czechs lost 2-3 at the bottom of the 11th inning but had demonstrated that they had moved up to the next level.

On top of that, in 2008 the Czech Republic hosted the 4th World University Baseball Championship. The stage for the tournament was Brno, a city which stands next to Prague as the mecca of Czech baseball. There, 7 teams appeared and America won in the final game by defeating Japan 1-0. The Czech hosts were only able to put up one win, against Lithuania, but the stadiums were well prepared and the spectators well behaved. It was a wonderful tournament that earned a lot of praise for the Czech hospitality. It's being said that the Czech Republic making steady progress in baseball can be seen not only in their team getting stronger, but also in having good infrastructure, first of all stadiums, and in the way they are actively fostering the younger generation of players. 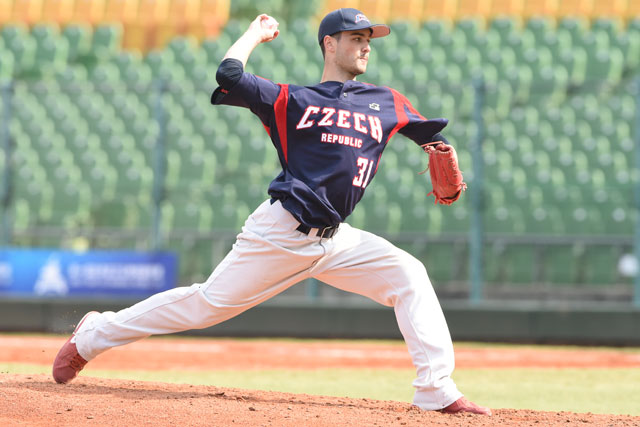 As a result of showing they were now on the world stage, when it was unofficially decided that a qualifying round would be introduced starting with the 3rd WBC, Czech participation was accepted. At the WBC Qualifier 2 held in Germany in September 2012, Canada, Germany and Great Britain also appeared. In the first round the Czechs lost to Germany when the game was called after 6 innings and they also lost to Great Britain in the elimination game for teams that had lost once. They were not able to earn their first WBC victory. However, because they are a young team with an average age of 26, they have a great future ahead of them with the talent they've brought together. At the head of the list is Jakub Sladek who that year came to Japan and played for the BC League's Ishikawa Million Stars as an infielder. This left handed slugger gained experience on one of the teams in the Philadelphia Phillies organization. He is now 4th in the batting lineup as a Czech representative and last year at the European Baseball Championship stood out with a batting record of .517 (2nd), 5 home runs (1st) and 13 RBI's (tied 2nd). There are also 202cm right handed Michael Sobotka and catcher Martin Cervenka, who played in the Cleveland Indians organization in 2007, who both appeared in last year's 21U World Cup in the overage quota.

Among those who will bear the burden in the next generation are players like Richard Sazavsky, an outfielder who hit a home run against Italy in the 21U World Cup, and Matej Brabec, who was promoted to relief pitcher for the game against Mexico which was a great comeback victory for the Czechs. I think the Czech Republic has talents whose performances would stand out even if they played in Japan. At last year's 12U European Baseball Championship they were 3rd, at the 15U European Baseball Championship they were 2nd, and they won the 21U European Baseball Championship. Steady fostering and strengthening of each age group has been conspicuous in the Czech Republic. The Extraliga appears to have begun television broadcasts of its games. This has caused a person in baseball from another country to rate the league highly and say, “With that kind of effort they are sure to cultivate a fan base and that will certainly lead to an improvement in the league.” This season too, with Kotlarka Prague and Draci Brno first of all, the 8 teams will be centered in Prague and Brno and play a five round, round robin for a total of 35 games. It will be fun to see which players distinguish themselves in the Extraliga. Also, in the Major Leagues, with the Czech born, American raised player Carl Linhart, who played for the Detroit Tigers in 1952, as a pioneer, it would not be strange to see regular class players from the Czech Republic in the near future. Or perhaps players will appear who want to play in Japan. In either case, I won't be able to take my eyes away from Czech baseball.