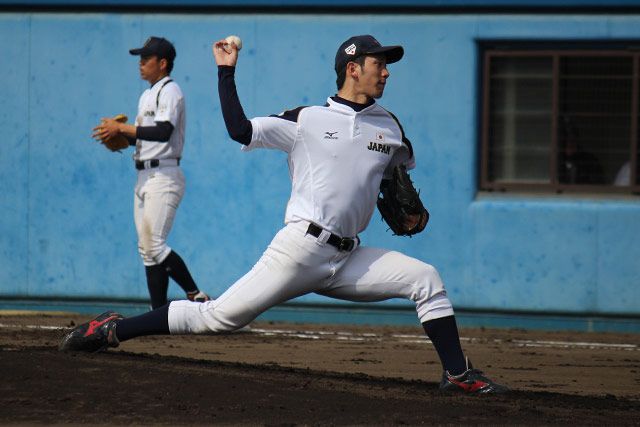 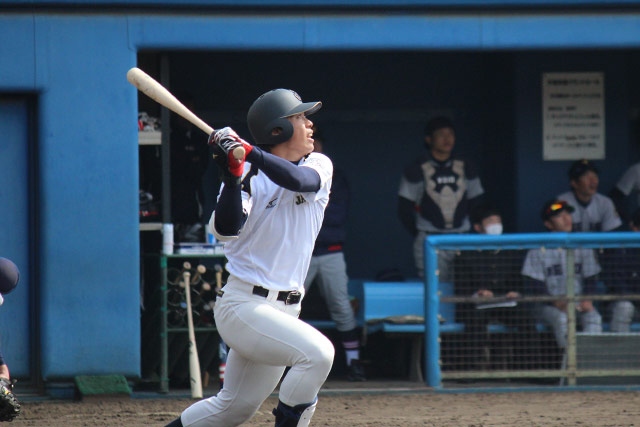 The selection camp for choosing players to represent Japan in the “28th Universiad Tournament” held in Korea, Gwangju this July began on the 17th at the Batting Palace Soseki Hiratsuka Stadium. Two open matches were held to determine which players would be selected.

In the first game, they faced Keio University. In the bottom of the second, the Collegiate National Team candidates got a lift from Naoki Yoshikawa (Chukei Gakuin Univ, batting 6th) who got on base with a hit to right field. Then, Koji Oshiro (Rikyo U) hit to the left, creating an opportunity with no outs, and runners on first and second. Yoshikawa took advantage of a loose battery and stole third. Oshiro also managed to steal second, leaving Seishiro Sakamoto (Meiji U) with runners on second and third with no outs. He knocked a grounder to the infield to get the Collegiate National hopefuls the first run of the game. Then with a balk from the pitcher, they spread the lead to 2-0. With two outs and a runner on first, lead-off hitter Shun Takayama (Meiji U) batted in a third run with a double to left field.

Starting pitcher Mitsuhiro Ishida (Kansai U) did give up some hits, but still held down the fort, getting 4 Ks in 2 innings. Taking the mound in the top of the 5th, Rei Takahashi (Senshu U) also showed excellent pitching. With his right-handed underhand 135kmph fastballs, he downed his first two batters with strike-outs and gave up no runs through two innings, appealing to the coaching staff. Manager Yoshinami commented, “Underhanders are valuable in international tournaments, and he used fast and slow balls really well.”

However, in the top of the 7th, Ryotaro Ide (Kyushu Sangyo U) took the mound as the fourth pitcher and gave up the lead to 3-4. Then he faced a pinch with one-out and runners on first and third. Furthermore, Keio University’s Daiki Saitoh (batting 5th) hit to center-field, and other hits led to 5 runs given up, 3-7, a wide lead. Still the collegiate Japan potentials got hits from Sho Azegami (Hosei University) in the bottom of the 7th and Shoji Kitamura (Asia University) in the bottom of the 8th, closing the lead. Then in the bottom of the 9th, Yoshikawa got his third hit of the day to come within one, but they still lost 6-7 in a tough match. 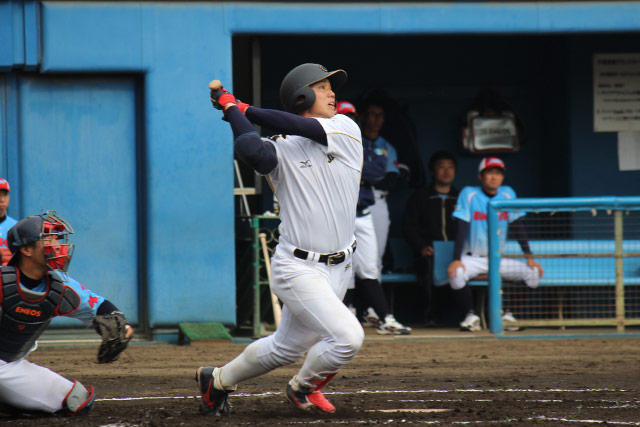 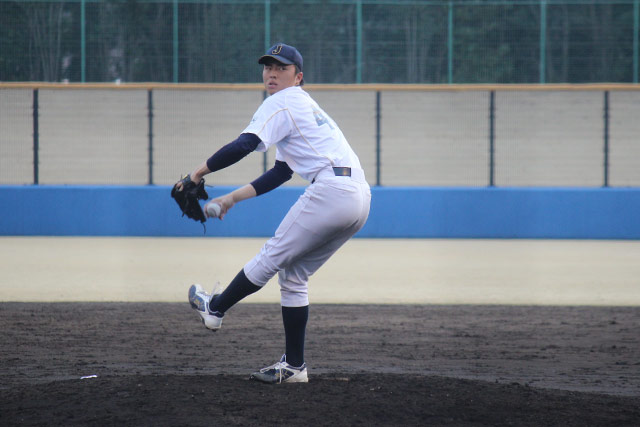 Next up was the second game, this one against JX-ENEOS, which featured special rules so that it would be played through 12 innings. In the bottom of the 2nd, the Collegiate National Team hopefuls gave up 2 runs, but with a double from Masataka Yoshida (Aoyama Gakuin U., batting 3rd) in the third with two outs and the bases loaded tied the game. Toshitake Yokoo (Keio U.) added an RBI to center mid to take the lead, with Seigo Yada (Keio U.) adding a solo homer and others pitching in to make it 6-2. After giving up two runs in the bottom of the 6th, Takayama’s RBI in the top of the seventh put the lead back to 7-4. Haruhiro Hamaguchi (Kanagawa U.) gave up two runs in the back half to face a 7-6 one-run lead, but he didn’t allow the tying run.

After the game, Manager Tatsuya Yoshinami said, “I told the pitchers that breaking balls would be a theme, and all of them showed me that they are working to make breaking balls a part of their repertoire. Also, the fielders showed that they can handle different positions, so I think everyone has grown in the 3 months since the Matsuyama training camp held late last November.

Many of the pitchers and fielders have made their best cases to the coaches, often showing the attitude and ability to work on problems pointed out by the coaching staff. Tomorrow is the last day of selection training camp; the players will have a normal practice and then camp will be finished.

In the Selection Conference to be held March 31st, the 31 players who participated in training camp will be sifted to 22 players. The mood and anticipation is high as everyone wonders which players will be selected as representatives on the Collegiate National Team.