Overview of the 17th Asian Games

During the Asian Games Semifinals on the 27th, against Chinese Taipei (henceforth referred to as Taiwan), the Samurai Japan Amateur Team lost 4-10. At that moment, they lost the right to challenge the gold medal they were aiming toward.
After the game, the captain Yuichi Tabata (32=Honda) arrived at the press conference room with bloodshot eyes. There was still dirt on his chest from when he dived for first base in the seventh inning. When Tabata was asked to reflect on his games to up until that point, he answered with vigor in his large eyes: "We shouldn't be regretting the entire thing yet. I'm going to move on and face tomorrow." Tabata and the other members of Team Japan fought with all their might until the final pitch, and won 10-0 against China by the mercy rule in the bronze medal game the next day. They had won their second straight bronze medal. 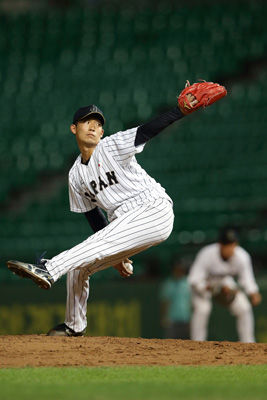 International games have something unique that ordinary games do not. The players thought of this as "experience", and kept on looking ahead. Reo Moriyasu (27=Mitsubishi Heavy Industries Kobe), who started in the Pakistan game, was representing his country for the first time since the Asian Championships during his university days. "I felt responsibility", says Moriyasu, who stood up in spite of the challenge of being unaccustomed to the pre-game ceremony, and gave up a run in the first inning. But after the second round, he gradually became accustomed to the atmosphere, saying, "I corrected my pitches so they weren't so straight and easy."
Ryota Sekiya (23=JR East Japan) pitched twice consecutively, for the semifinals and bronze medal game. Though he says "there was a challege" in the gap of ability between Taiwan and China's teams, he said "But I still have to do it". He started and pitched six innings in the bronze medal game, keeping China's offense at 0 points. Sekiya took the mound in three games this tournament, and pitched ten scoreless inniings. He had the best record of all pitchers in the games.

The opposing team's moods also threw the players off their rhythm. The infielder Issei Endo (25=Tokyo Gas) said of the Pakistan game, "The Pakistan team's players were so relaxed during practice, that we followed their lead, and we didn't click in at first. But that all changed between innings when the captain led us all to say, 'Let's do what we have to do'." In this game, Endo hit two singles as third batter. 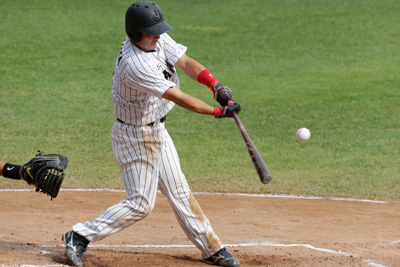 While Korea and Taiwan's teams consisted of mostly professionals, Japan's amateur team achieved results on par with theirs. Tabata had the second-highest batting average in the games, at .600. The third-highest batting average went to Takuya Fujishima (31=JR Kyushu), who hit 8 singles, tying for second place in single hits. Toshiyuki Hayashi (34=Fuji Heavy Industries), Akira Matsumoto (29=JR East Japan), and Toshihiko Kuramoto (23=Nippon Shinyaku) won 2nd-4th place in runs batted in. Each player served the role they were given reliably.

After the games, Coach Hirotami Kojima (50=Mitsubishi Heavy Industries/Nagasaki Prefectural Government) said, "I felt there was a gap with Korea, but I didn't feel a gap with Taiwan. There was a paper-thin difference." While these results come from just five games, Japan topped these games in both team earned run average (0.97) and team batting average (.405). This is a bronze medal they can be proud of. 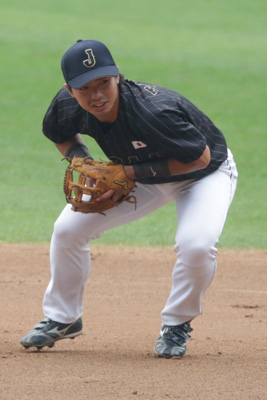 A Korean reporter covering the bronze medal game with China said the following. "Japan had a very high-level field." That day in particular, Ken Tanaka (24=Nippon Steel Kazusa Magic), who started on second, demonstrated graceful moves in his cutoff play from the right field in the bottom of the first, playing the ball back home. The runner was tagged out, preventing the opponents from taking a lead. When the leadoff batter in the bottom of the third tried to hit the ball in the hole, Tanaka caught it with agile movement, and made a jump-throw to first base. This was a graceful and meaningful out that saved Sekiya, who was being fouled off.
After the games were over, Coach Kojima said, "Our players were more brisk and speedy, and showed the spirit of fair play more than any other team. I am satisfied to see their teamwork, the glory of Japan, so prevalently."

On the bottom of the seventh during the bronze medal game, the score was 10-0 against China. During the final inning before the mercy rule was invoked, Tsukasa Komatsu (32=JFE East Japan), the oldest pitcher on the team, struck two batters out, and for the last one, Coach Kojima appointed Katsutoshi Satake (30=Toyota Motor Corporation) as "the leader to finish the pitching". Satake got the final batter to hit a ground out to third, bringing the game to its conclusion.

In Korea, the outfielders who took turns as batter and pitcher before the game, the team staff that supported the players, and everyone else all fought as one. Their whole families came from Japan to cheer them on, with their husbands' uniforms bearing the rising sun in their hands. 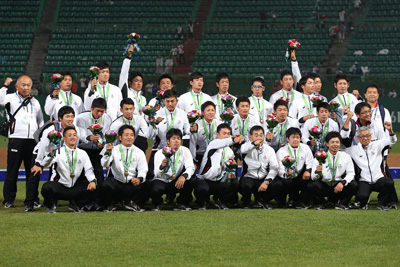 At the awards ceremony after the finals, Korea and Taiwan's players loudly expressed their joy, still in their uniforms from the game, but Japan's players modestly raised their right hands in their team wear, in answer to the audience's applause. The bronze medals that adorned those humble samurai shone brighter than any gold or silver.
They returned to their teams, and many players will compete in the Japan Amateur Baseball Championships in November. The several valuable experiences in the Asian Games are sure to display themselves on the next stage.