In order to prepare for the 17th Asian Games starting on September 22nd, the Samurai Japan Amateur National Baseball Team started their second training camp on the 12th. They had a warm up match against the Chiba Lotte Marines (farm team) on the 13th. 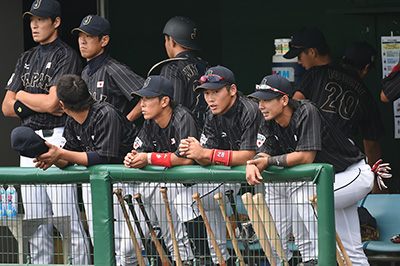 Manager Hirotami Kojima said,
'The aim of having this game is to see what it's like to play against the Chiba Lotte Marines, a pro team and how well our team can hit their fast balls. Because the pitchers of both Team Chinese Taipei and Team Korea throw very fast balls, we need to get used to hitting them.'
With games against Team Korea and Team Chinese Taipei in mind, they started the game. As soon as it began, in the bottom half of the 1st inning, they let the Chiba Lotte Marines' lead-off batter Shota Omine hit a mega home run and be the first to score. After that, they let their opponents get another 4 runs, when the 7th batter, Takumi Kobe and the 8th batter, Yuta Yoshida had clutch hits with the bases loaded and two outs.
The Amateur National Team let the Chiba Lotte Marines take a huge lead at the beginning of the game. In the bottom half of the 4th inning, the starting pitcher, Takuaki Iguchi (Nippon Express) let Omine hit another home run, which forced him to leave the mound.

'If we let Team Chinese Taipei or Team Korea take the lead in the 1st inning like this, I'm afraid it might end up as a one-sided game. It is essential that the pitcher keep his physical and mental stamina high in real games. I hope that the team hangs in there and manages to turn the tables in such an adverse situation as this.'
As manager Kojima was hoping, in the top half of the 6th inning,
when the 2nd batter, Toshihiko Kuramoto (Nippon Shinyaku) was at bat with a runner on first base and two outs, a pinch runner, Taihei Fukuda (Nippon Shinyaku) successfully stole a base, and Kuramoto hit a single that dropped in front of right field to score a run. With runners on first and second bases and two outs, the cleanup hitter, Toshiyuki Hayashi (Fuji Heavy Industries) knocked a run-scoring double to deep right to make the team only 3 runs behind their opponents.
In the top half of the 8th inning, Kuramoto hit a two-base hit over the left-field fence with the first pitch. With him on second base and two outs, the 5th batter, Akira Matsumoto had a clutch hit in front of right field to make the score 4 to 6. 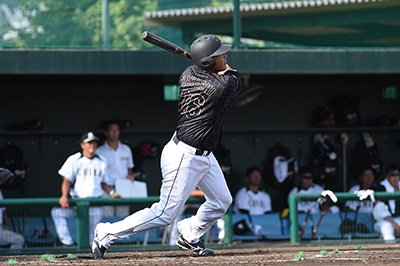 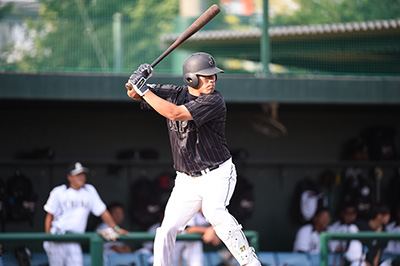 Although the Amateur National Team gave up 6 runs at the beginning, Tsukasa Koumatsu (JFE Steel Corporation East Japan Works), who replaced Iguchi, pitched without any additional runs allowed until Ryota Sekiya (JR East Japan) took over in the bottom half of the 6th inning, where he struck out Ikuhiro Kiyota and Kobe with fast balls at a speed of 140 kmph (87.5 mph), sharp sliders, curves and forkballs that dropped hard. He struck out 6 batters in the 6th, 7th and 8th innings altogether. 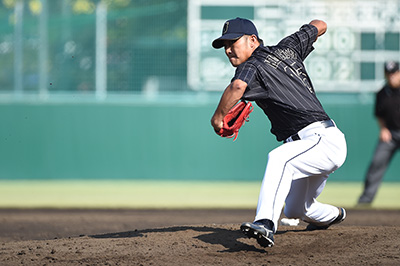 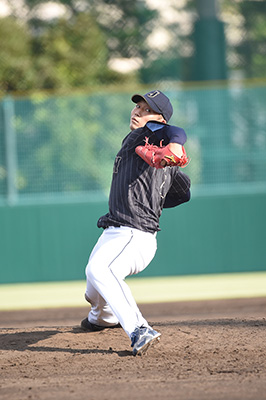 In the 8th inning with runners on first and second bases and two outs, a lefthander, Koshiro Imamura (Saibu Gas) from the Amateur National Team pitched against a left-handed batter Nemoto. Throwing off the hitter's timing with his pitching from the left side, Imamura struck him out swinging with straight fast balls to finish the inning without giving up any runs.
However, they ended the game 4 to 6 without gaining any more runs in the top half of the 9th inning. 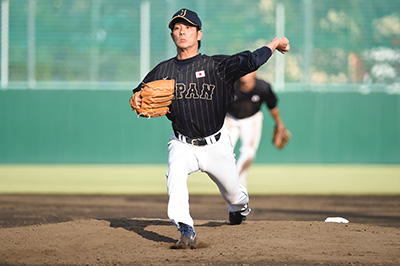 After the game, manager Kojima said,
'In the second half of the game, our team kept up their all-out attack. They batted well even when they didn't score any runs. Even if our team wasn't dominant, we surely had the upper hand in the second half.'
He also said that he started to know more about the pitching staff during the game.
'It's up to us, manager and coaches, to use the right pitcher in the right situation so that he can show his ability to the fullest. We don't have any big ace pitchers this year. Not all of them are good enough to pitch in professional baseball, either. That's why it is very important to use 'who' at 'when'. At the moment, we don't have much use for Imamura, who only pitched in the 8th inning today, but you never know. We might give him more opportunities in the future depending on how well he does. I also gave Sekiya the task to improve his pitching. I'm sure he keeps it in mind when he pitches. He didn't have a chance to show what he's learned from working on the task in the game today, though. We'll see what he's got in the upcoming warm up matches.'

Manager Kojima gave each one of the players a challenge to work on just after the first training camp. How did they do with their challenges before the second camp began?
'In the game, I was able to see that they all have been trying hard to solve their challenges. They have made a lot of progress. Now their goal is to show what they've learned in real games in order to win.'
Manager Kojima said, 'The training camps we've had are 'mere preparation'.
'Although we lost the game, it was very meaningful. We are on the right track.'

The Samurai Japan Amateur National Baseball Team is scheduled to have two more warm up matches on the 15th and the 16th. Then they will spend the last day of the camp practicing with no more games. As soon as the camp ends, they will leave for Korea, where the 17th Asian Games start on the 22nd. Let's hope that they make the best of the limited time left for them to get ready for the big games in Korea.

Results of the Games