The VIII BFA Asian 12U Baseball World Cup was held from August 27 to 31, 2014 in the Philippines, and Japan was 2nd place among the 6 teams in Asia. As a head coach, I have had the chance to be at the very heart of little league baseball; and it's been a great opportunity to learn teaching methods and concepts related to young children. I can't say that second place pleases me. As a coach, it forces me to question my own ability. I am still asking myself what else I could have done in the lead up to the final, what more I could have done for the final game against Taiwan. On the other hand, this championship gave us a clear indication of what we need to work on, things we need to improve and and apply in future games. 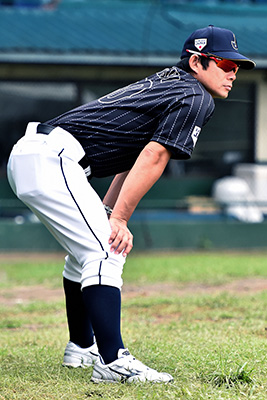 We started selection screening using videos, which is an innovative way to create a team. Because the championships are held at the end of summer vacation or around the time when school starts, lots of parents and coaches wonder whether they should apply or not. There must have been many people who could not take videos well, who could not get good shots, or whose videos were hard to see because of image quality. Six were selected on the basis of general categories, which was fewer than we expected, but establishing a better selection system, one that includes players from different regions that have been recommended, will help us to select players with higher skill.

In the end, we selected 15 players. We needed to get through 5 games with the small number of players we had, and the number of pitches per pitcher was strictly limited, which made it difficult to take advantage of our strengths when we had the lead. We also had to ask some of the kids to play positions that they weren't used to playing; but I'm happy to say that they tried their best to adjust, there were some fine plays made by players in positions they were not used to. It was great to see them execute plays that embodied the vision that I had started with. I recognized anew that my feelings about the game had not and should not change.

What I wanted them to do was to think about their game and use their judgment.
Before stepping up to the plate, for example, I wanted each of them to know which pitches they would focus on and what they would be watching out for. During defense too, they should look ahead in the same way. When a fly ball has been hit, the player who has it should let others know. They should communicate with one another. I told them to consider each situation, use their judgment, and take the initiative to act. If I simply tell them what to do, they would never learn to think for themselves and they take nothing away from the game. Even if they make a mistake, they can learn from it and apply what they've learned to the next game. I believe it's very important that they not only consider what they did, but also why they did it.

In the end, asking each player to think about what should be done or what was done requires coaches to trust the player and help them to have clear answers. They are still young; therefore, they may not fully understand their thinking or even try to hide it. However, it's up to me to trust them. I need to prevent myself from telling what to do before they have a chance to think about it, otherwise they will lose the chance to learn to think and act by themselves. While I asked them what they want to do, or what they should do, I also asked the same questions to myself and try to come up with answers. 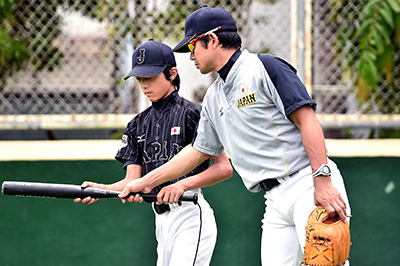 The kids can only understand the pleasure of baseball if they can play. I know no one wants to lose, but they need to compete against others to build their ability to win. For this, they need to be tough enough to bear the hardships and severity it takes to become a good player. It is also important to work with teammates to adjust themselves to the environment. I believe that the experience of adjusting themselves to an environment that was completely different from their usual environment was very meaningful for them.

Right now, I hope that this experience will lead to the further growth of all the children who played in this championship; and this is, I believe, our mission as coaches.

The sound growth of junior baseball players brings us a bright future. I am looking forward to meeting more and more children who wish to play for Samurai Japan as we work to improve the level of baseball in Japan.
I also look forward to seeing these youngsters become strong baseball players representing Japan in the near future.

Let me take this occasion to express my gratitude to all the people who have cooperated for our first trial as Samurai Japan 12U.