The “WBSC Premier 12 (provisional name)” – The international tournament that determines “World’s No.1” - 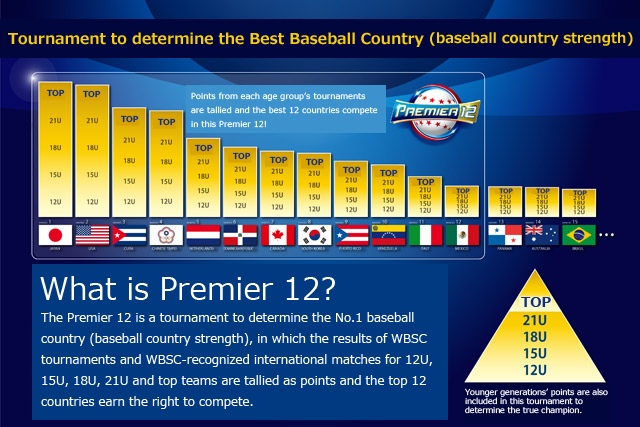 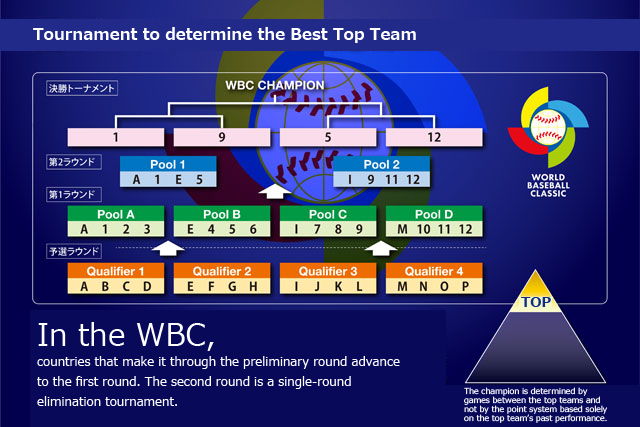 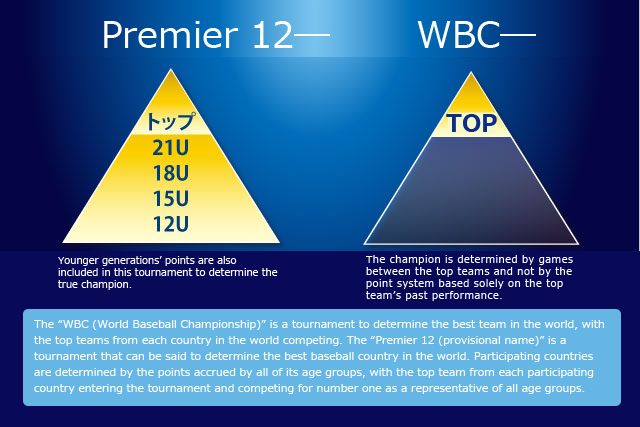 The right to participate in the “WBSC Premier 12 (provisional name)” to be held for the first time in November 2015 was given to countries in the top 12 positions (Japan is No.1) in the 2014 “WBSC Rankings.” A key feature of the “WBSC Rankings” is that the tournament results for all age groups, not just the top team, are included in the calculation.
*WBSC: World Baseball Softball Confederation

Japan has 785.18 points, with only 36.9% (290 points) coming from the top team. The (provisionally-named) “WBSC Premier 12” can be said to gather the top 12 countries in terms of their “overall baseball ability (baseball country strength)”, as it is not a measure of only the top team’s strength.

As a result of consistent success at not only the top team level but all age groups, Japan has earned a spot in the tournament as “No.1 Baseball Country.” The Samurai Japan players are going into this year’s tournament proud to be the “No.1 Baseball Country” and look to win the championship as representatives of all “Japanese baseball”, including the younger generations.

* Being 16 years old or younger was the eligibility qualification for participating in the 15th AA Baseball World Championship.

Results from any WBSC-hosted or WBSC-recognized tournaments (including all age group tournaments) held in the past 4 years are tallied, with recalculations at the end of each tournament. The method for calculating points is as follows: 1st place, 50 points; 2nd place, 40 points; 3rd place, 30 points and so on for base points, which are then multiplied by a factor from 0.25 ? 6 based on the tournament scope or level. In international games, the points acquired for a win depend on the opposing team’s ranking from the previous year.

Difference between the Premier 12 and the WBC

The “WBC (World Baseball Championship)” is a tournament to determine the best team in the world, with the top teams from each country in the world competing. The “Premier 12 (provisional name)” is a tournament that can be said to determine the best baseball country in the world. Participating countries are determined by the points accrued by all of its age groups, with the top team from each participating country entering the tournament and competing for number one as a representative of all age groups.